The Biggest Game In Town 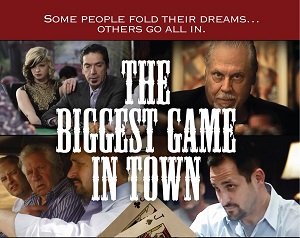 The biggest in town is a true epitome of an Indie film… a feature film made on a micro-budget shot on weekends over a 2 year time period by a group of local talented artists. Shot on location locally at Auto –Vino winery in Menlo Park to the south bay towns of Morgan Hill, Gilroy, Hollister & Monterey County. A remarkable feat of passion and fearless determination to finish what was started and create the best movie possible. The Biggest Game In Town is an underdog movie with a dream, a small local indie film that aspires to be great in a sea of bigger budget movies. Written, Directed & produced by John Nava, whose day job is working at the locally based premiere specialty market Sigona’s Farmers Markets in Redwood City & Palo Alto. Co- starring one of Sigona’s owners John Sigona Jr. Produced also by the husband & wife team of Nils Myers, L. Mattock Myers of 152 West Productions of Gilroy Ca. Starring local actor Jayson Stebbins whose role has been reviewed as simply stunning. The rest of the cast is rounded out by some of the best seasoned local actors the bay area has to offer… Ralph Noe, David Buck, Steve Caposio, Denee Lewis, Eric Zivot, and local Elvis tribute artist Rick Torres. Just a few months ago “The Biggest Game In Town” had its opening premiere and played to a packed house at the Golden State Theatre in Monterey Ca. with reviews of… “The wackiness of the hangover & some of the suspense of “Ocean’s Eleven”.  And… “A script with its wry, dark humor that you could easily see Hollywood buying and shown at Cineplex’s throughout the country”

Home game poker champ Atticus Cane is a dreamer. He dreams of one day winning enough money to buy his wife Tessa her dream house. He and two friends embark on a one-of-a-kind poker adventure in search of a legendary card game. Unbeknownst to their wives they’re risking their life savings. A dream turns into a pre monition and Atticus must face his fears against the best poker player you’ve never heard of, in… ‘THE BIGGEST GAME IN TOWN”