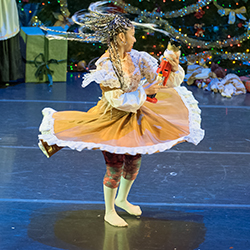 Mix it up with this new holiday classic!

If you missed the last two years of HIP HOP Nutcracker do not do it again.  Every seat sold out and the audience only wanted one thing: MORE!

Tchaikovsky music still reigns supreme with several new twists and reimagining’s brought to life by choreographers Alee Martinez and Issac ‘Stuck’ Sanders.  Co-Founders and directors of The Tribe and Poise’n both Martinez and Sanders have a rich dance and hip hop history. They mix the iconic pieces of the story and Tchaikovsky’s score (with some added twists) and create explosive hip-hop dance

The Performers: A cast of 35 all-star hip-hop artists from The Tribe and Poise’n join Peninsula Ballet Theatre dancers to transport the score and story with a contemporary flavor. Sanders and Martinez, dance partners who met at the Academy of Villains, incorporate their dance and hip-hop backgrounds into the performance, fusing love, holiday spirit, community, and even a little magic. Sanders born and raised in Sacramento earned his reputation as a developer of Turf Dancing during numerous Battle Dances.  Martinez, a Bay Area native, has traveled the globe teaching dance and has appeared in Americas Got Talent Season 7 and was crowned “Fake Off Champions” with her dance crew in the show Fake Off.

The Story: Clara receives a prized wooden nutcracker during a holiday party at her Victorian home. Once she falls asleep, her dream takes into a world with wizards, toy soldiers, mice, and a sugar plum fairy. But instead of Candy Land, Clara finds herself in a modern hip-hop land dancing with characters who don’t look or dance the way they do back home!

Meet the cast after every performance

NO REFUNDS OR EXCHANGES FOR ANY REASON